I just laid in my bed (almost) all day….not such a good plan, but every time I would get out I would just feel so awful I would climb back in.  It was despair- deep, dark, heavy, painful, heart wrenching despair.  My heart felt like it weighed 500 pounds.  I could not see the light at the end of the tunnel.  I could not even see an end to the tunnel.

I wonder, so often, how people get through this.  I wonder equally often how such pain is even humanly possible because I feel as if the heaviness will just make my heart stop beating.

As I lay in bed I wanted to feel close to Lucas, which is not often, strangely because it hurts too much.  As far away as I can stay to that “closeness” the better.  Yet I had this longing to read the texts we had sent to each other, almost just to convince myself that I could do it.

So I did.  I scrolled and scrolled and scrolled through, “tell Rich to start dinner” and many many “what time do you want me to pick you up” texts.  Then I got to the ones where I was pestering him to find his coat.  I had bought him a brand new coat this year, not a cheap one, and he had lost it.  As a mother, I felt this was a big problem.  There were “did you check the bus”, “did you check every class”, “did you check the office again?” It went on and on.  It was such a big deal to me.  He felt very badly about it.  Very. Badly.  As the mom of a teenager I thought would be in my life forever, I continued to berate him about losing the $200 coat.  He kept telling me over and over, “the old north face is fine.  I don’t need a new one.  Its fine.  Its fine.  Its fine.” It was a lighter weight spring-ish version he had had for two years.  I ended up buying him another new one.  It is hanging in our closet having been worn once.  The day he died he was wearing the old north face coat.

I also had gotten on his case about shoes.  I had bought him brand new shoes as part of his christmas present.  I had hinted very obviously about this fact yet he went and bought new ones with his grandma when he was there for the weekend.  I was pissed.  I went off on him over text, for no particular reason, it seems, other than the fact that I had picked out these cool ones and I didn’t like the ones he had picked.  The gorgeous bright blue and green tennis shoes that I bought him are now in our garage in a bin with his backpack, untouched, waiting. Worn less than a month.  For…what?  I don’t know.

I did find these two texts. 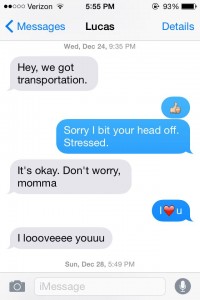 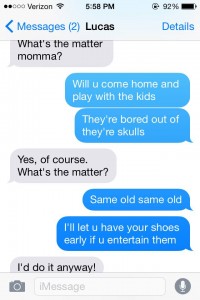 My sweetheart.  My wonderful boy.  My pain is as deep as the love I had for him.  I am going to learn from him like I hope others do as well.  Learn to love like Jesus.  Unconditionally. 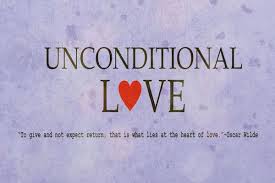 “to give and not expect return, that is what lies at the heart of love”